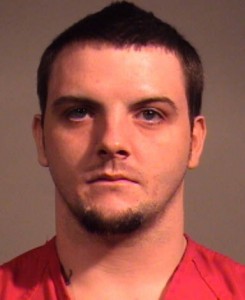 On November 7, 2013, David Hiram Gilbert, 24, of War, West Virginia, pleaded guilty to one count of first degree felony murder arising from the November 23, 2011 death of Leroy Shortridge in the Watkins Branch section of Grundy, Virginia.  After accepting the plea agreement, Buchanan County Circuit Court Judge Patrick Johnson sentenced Gilbert to 60 years in a Virginia penitentiary with 30 years of that sentence suspended on the condition that Gilbert successfully complete 20 years of supervised probation.

According to prosecutors, on November 23, 2011, Gilbert and his girlfriend, Laura Click, conspired to rob Shortridge who was a distant relative of Click’s.  The duo drove to the camper that Shortridge lived in and attempted to rob him; however, a struggle ensued, and during this struggle, Gilbert struck Shortridge in the back of the head with a blunt object.  The pair then fled the scene. It is believed that Shortridge began walking out of the hollow for help but eventually succumbed to his injuries.

The next day, Shortridge’s nephew found him lying in the creek next to the roadway. Police initially worked the case as an accidental death but later determined that the death was the result of foul play once additional evidence came to light.

When asked for comment, Commonwealth’s Attorney Gerald Arrington stated “I was pleased with the results in this case given its difficult and prolonged investigation. After meeting with investigators and with the Shortidge family, everyone seemed pleased with the sentence and felt that it was a fair result.  I hope that this sentence will bring closure and begin the healing process for them.”

Arrington went on to praise Special Agent Marcus McClanahan of the Virginia State Police and Investigator Carla Fletcher of the Buchanan County Sheriff’s Office for their hard work during the investigation of this case.