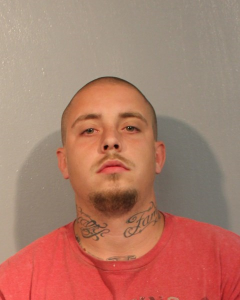 Earlier this month, the Buchanan County Circuit Court sentenced Charles Wayne Sexton, 25, to 67 years in the state penitentiary, with 53 years of that sentence suspended for 3 counts of Conspiracy to Manufacture Methamphetamine, 2 counts of being a Violent Felon in Possession of a Firearm, and a Probation Violation.  Prior to the commission of the meth and firearm charges, Sexton was on probation for multiple counts of carnal knowledge of a 14 year old child, child pornography, and various larceny charges.

At the hearing, the Defendant was given two mandatory sentences of 5 years of incarceration for the two counts of being a Violent Felon in Possession of a Firearm.  He also received 2 years for Conspiracy to Manufacture Methamphetamine and an additional 2 years for committing these crimes while being on probation.  In all, Sexton will serve an active 14 year sentence, 10 years of which is a mandatory minimum sentence.

Buchanan County Commonwealth’s Attorney, Gerald Arrington, stated, “While my office always takes drug cases, and particularly methamphetamine manufacturing cases, seriously, Mr. Sexton was of particular interest to me.  Mr. Sexton’s previous convictions were of a horrific nature, and he more than anyone should have been walking a straight and narrow path while on probation.  Instead, he chose to violate his probation by cooking meth and arming himself with a pistol.  I consider removing a violent sex offender from our community for the next 14 years to be a major win for Buchanan County.”