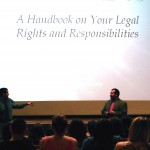 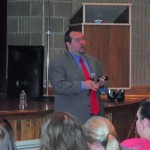 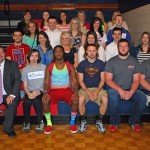 Last week Buchanan County Commonwealth’s Attorney Gerald Arrington unveiled his “So Now You’re 18” program at two area high schools. He began his tour of the four county high schools on Monday with a stop at Hurley High School followed by a visit to Twin Valley High on Thursday.

Arrington began the program by telling seniors that “this may not be the most exciting hour of your school year, but it could well be the most informative, and besides it has to be better than algebra right?” He went on to explain that as a young adult, he knew little more about adulthood than he was now allowed to buy tobacco and move out of his parents’ home. Arrington surmised that “I suspect many of you are in the same boat that I was, and it is the goal of this program to better inform you of all of the new rights and privileges that accompany adulthood, but perhaps more importantly, all of the responsibilities that come along with it too.”

Over the course of the next 50 minutes, Arrington discussed a wide variety of topics such as one’s civic duties such voting and jury service, as well as the new financial duties that accompany adulthood. The program educated the young adults on how to find and land a job, the basics of contracts, warranties and leases, and the basics of landlord-tenant relationships. One topic that seemed of particular interest to students was the portion of the program that dealt with the harsher criminal liability that accompanies adulthood. Arrington explained the difference between misdemeanors and felonies, explained that as adults, their criminal records would now be permanent and could impact their futures forever, and explained the potential penalties for crimes that were common among young adults such as drunk driving, underage possession of alcohol, and “sexting.”

At the conclusion of the program, Arrington thanked the students for their attention and also thanked the Buchanan County Board of Supervisors for their generous support of the program as well as the Buchanan County School Board for allowing him the opportunity to speak with the students. In discussing the program with local media, Arrington told reporters that “it was a proud moment when I realized that I was the first Commonwealth’s Attorney Buchanan County has ever had develop a program for our youth, and actually, the first to ever implement any type of community outreach program.” Arrington went on to add “I will consider this program to be a great success if we can help a few students understand the major responsibilities that accompany adulthood, or if we can scare just one student away from drinking and driving or some other serious crime.”