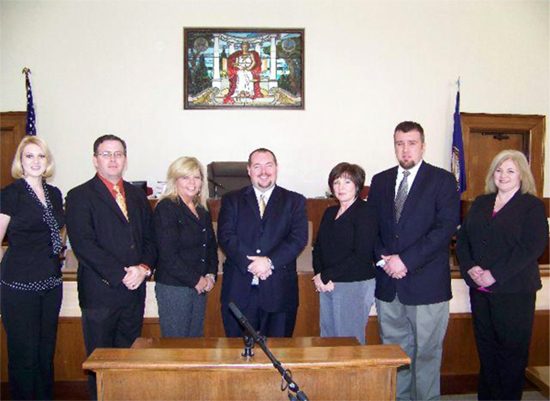 “I kept my promise to hire local people,” said newly installed Buchanan County Commonwealth’s Attorney Gerald Arrington in regards to his staff. This is only one of the many changes and innovations Arrington says he is either implementing or initiating at this point.

During his first month as the county’s elected prosecutor, Arrington has already begun sweeping changes to the office; starting with one of his campaign promises to staff that office with as many local residents as possible. To that end, only three of the eight former employees have been retained in the new administration.

Arrington has reduced the office’s staff by one for the time being, having combined two existing positions and essentially saving taxpayers $24,000 per year. The eliminated position was a part-time Juvenile and Domestic Relations (J&DR) Prosecutor that was normally only utilized one full day per week.

By combining that J&DR position with the regular duties of another prosecutor position, Arrington says he is able to realize a $2,000 a month savings. Those are savings he is currently using to help fund other needed changes, such as a software and computer system overhaul of his department as well as ensuring access to the Virginia Criminal Information Network and National Crime Information Center for his office. These systems give his staff instant access to a defendant’s past criminal history, their DMV driving records, and information about any pending charges that the individual may have.

“I feel it’s important to make the best use of this office’s resources,” Arrington said, “because I feel the increase of crime that will likely come from the addition of Walmart and other businesses at the Grundy Redevelopment site may strain our resources, which are already limited.”

Although he has reduced his staff from eight employees to seven, Arrington hopes that in the future, he will be able to secure additional funding, which combined with those savings, will allow him to add another paralegal that he says would make his office much more efficient and productive.

The personnel Arrington has retained from the previous administration are Asst. Commonwealth’s Attorneys Nick Compton and John Dusewicz, along with paralegal/office manager Anne Randolph. Compton is a native of Council and Randolph hails from Harman; Dusewicz is a county resident who is originally from Gloucester County, Va.
The four new employees in the office include Asst. Commonwealth’s Attorney Sandy Ward, a life-long Grundy resident in private practice on Walnut Street prior to this new position. Ward holds the newly combined position, which integrates criminal and J&DR cases; she benefits from experience in the family court system in her private practice.

ASL graduate Crawford Ellsworth, is another new Asst. Commonwealth’s Attorney. He and his new bride Amber Lester, of Hurley, Virginia, and his step-daughter six-year-old Jayci are presently living in the county and hope to soon reside in the Hurley community. Arrington said that he appreciated Ellsworth’s work ethic, pointing out that he worked his way through law school as a butcher at Food City.

The two other newcomers consist of paralegals Greta Sexton and Jessica Osborne. Sexton is from Grundy and previously worked at Buchan General Hospital. Osborne is from Sunset Hollow and has worked at the Buchanan County Probation Office and at the Appalachian School of Law.

Arrington is well satisfied with his current staff, citing their dedication from the first day under his administration. They all gave up their state holiday on Monday Jan. 2nd this year to get a jump on setting up operations for the incoming prosecutor; Arrington said this work ethic really impressed him. On Jan. 3, he and his employees had to be open to the public and be ready for numerous court cases. “It’s our job to serve the public,” Arrington said, “not the other way around.”

Another arena where Arrington promised to make changes to the Commonwealth’s Attorney’s Office is the use of confidential informants (CI’s) and how drug charges are pursued.

Many area residents have voiced concerns over how CI’s are used. One issue being the use of a CI to catch another offender committing an equal or lesser crime, simply to allow the CI consideration to reduce or nullify their own crimes. But possibly the most common complaint is that CI’s are given a license to break the law themselves simply because they are helping authorities.

Arrington plans to stick to his guns on this issue as well, stating he will encourage the various law enforcement agencies to share officers for undercover work whenever possible.

“I do appreciate the public’s concerns and their perception that some CI’s are the biggest rouges on the creek,” Arrington said, “But if we have a CI that is continuing to engage in crimes…we will stop using them and proceed with prosecuting them.” He said that he is currently working on this issue and hopes to make some real differences there very soon.

Comments during his campaign for office indicated that Arrington doesn’t like to hand out lengthy prison sentences for small time drug users. He stated that he wishes to focus on securing harsh prison terms for the “big fish”, the suppliers, not the addicts who sell a pill in order to feed their addiction.

“Don’t get me wrong, I’ll prosecute anyone who sells drugs,” Arrington said, “But I’d like to think there are a lot more people that there is hope for than there are persons deserving of long term prison sentences.”

Arrington says he will be tough on crime, stating that the community will be pleased with how he handles the big cases. But when it comes to young offenders or non-violent criminals, he says he just doesn’t like to see them stuck with a felony on their record if other alternative punishments are appropriate. While the new prosecutor readily shares his compassionate side with the public, he makes sure to point out that repeat offenders, violent criminals and drug traffickers need to beware, because as the saying goes, “There’s a new law in town.”