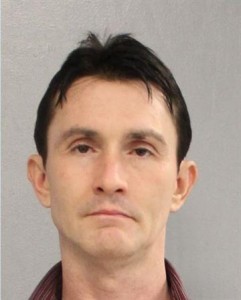 Donnie Waters, 43, of Home Creek, was convicted by a Buchanan County Jury on Thursday, March 24, 2016 of Felony Third or Subsequent Petit Larceny.  Immediately following conviction, the jury reconvened and recommended a sentence of 5 years, the maximum sentence allowed for this offense.

On May 12, 2014, the 911 Office received a report of “metal clanging” in the Peeled Poplar area near the railroad tracks.  Sargent Brandon Hall of the Buchanan County Sherriff’s Office conducted a traffic stop involving Waters in the same area, when he discovered that Waters was in possession of 15 railroad plates, 43 railroad spikes, and a pry bar.  During the trial, the Commonwealth presented evidence through Sargent Hall and a representative of the railroad, that numerous railroad spikes and plates had recently gone missing in the Peeled Poplar area.  That evidence, coupled with the fact that Waters was located in the same area with the missing items and a pry bar led the jury to convict Waters of Felony Petit Larceny, which, was his Third or Subsequent Theft Offense.

Gerald Arrington released the following statement, “I would first like to thank the citizens of Buchanan County for their help in this matter.   It was the efforts of our vigilant citizens assisting law enforcement that ultimately led to Mr. Waters’ conviction.  I am also proud of the work that my office did on this case, and thank them for their representation of the citizens of this County.  When I ran for office, I campaigned on being tough on property crimes.  In this case, the jury recommended a five-year sentence, which is the maximum allowed by law.  I hope this case sends out a loud message that the Commonwealth’s Attorney’s Office will not tolerate it, and neither will the citizens of Buchanan County.”