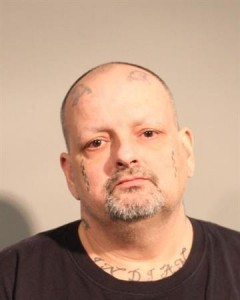 On October 21st, 2015, David Lee Bowman, 43, of Michigan, was sentenced to 115 years of incarceration with 81 years of that sentence suspended on the condition that the Defendant be placed on active supervised probation for the rest of his life. Prior to sentencing, Bowman previously pled guilty to two counts of Object Sexual Penetration on a child less than 13 years of age, two counts Aggravated Sexual Battery, five counts of Indecent Liberties, and five counts of Indecent Exposure.

During the sentencing hearing, the Commonwealth presented evidence that the Defendant, a member of the Aryan Brotherhood (a white supremacy group), was at the time of the criminal activity, married to the victim’s mother. The Defendant invited the victim, who was only 9 years old at the time, to accompany him in his bedroom while the victim’s mother was out of the home attending higher education courses.  On at least two occasions, the Defendant not only coerced the victim to masturbate him, but he also forced her to allow him to utilize an adult sex toy to penetrate her anus while he manually stimulated her vaginal area.

In the hearing, Commonwealth’s Attorney Gerald Arrington, pointed out to the Court that Bowman has had a long standing history of criminal-like behavior.  At a young age, he began killing and dismembering small animals, and attempted to set his mother’s home on fire.  His life in the criminal justice system started with his serving time in juvenile detention from the ages of 16 to 18 years old.  In later years, Bowman was convicted of various larceny, assault, and firearm charges.  In addition to his lifetime of criminal activity, the Defendant has been living off of public assistance most of his life, being first legally “disabled” in 1983 despite his ability to participate in motorcycle gang related activities during his affiliation with the Aryan Brotherhood.

The Defendant attempted to justify or mitigate his actions by stating during his Risk and Needs Assessment that he felt the 9 year old victim was flirting with him and trying to sexually arouse him.  While he did acknowledge that the victim appeared scared during the sexual abuse, he believed that his 9 year old step-daughter could feel closer to him through sexual contact.

The most moving evidence during the Defendant’s sentencing hearing occurred when Arrington allowed the victim, now 13 years of age, to confront her abuser.  During her testimony, which was given upon the victim’s request, the Defendant’s former step-daughter read to the Court a letter she had written to the Defendant.  While the victim bravely stated to the Defendant that she hoped he “died in prison for what he had done to her,” she considered herself lucky to be able to “move on” and be a stronger person.

At the conclusion of the evidence, Commonwealth’s Attorney Gerald Arrington requested that the Court impose a life sentence, stating that the most appropriate punishments of “castration with a dull knife” and death by the electric chair weren’t available to the Court.  Arrington further argued that a life sentence was more than justified given that the Defendant had essentially imposed a lifelong sentence to his victim when he sexually abused her, and that the emotional scars from her abuse would remain with her for the remainder of her life.

The Court agreed that the crimes against the 9 year old victim were atrocious, and while the Court did not impose a sentence of Lifetime Incarceration, it sentenced Bowman to an active prison sentence of 34 years, which fell near the highest end of the sentencing guidelines.

When asked for comment, Arrington stated that “child sexual abuse cases are some of the most difficult and heartbreaking crimes that my office and I prosecute…violating the innocence of a child is horrific, and it deserves the harshest punishment available. Mr. Bowman is one of the worst offenders that I have ever prosecuted, and I felt that a life sentence was justified.”